In Marrakech for the Biennale, an increasingly splendid extravaganza dropped from heaven on the Ochre City this year for the fifth time. There’s a lot of interesting art, and many friends in town. The opening took place at the Badi3 Palace, in a courtyard so huge that the other side was lost in the haze of unaccustomed sunshine. We wandered among strange installations and watched a film which the British Council had been responsible in a small way for supporting, Shezad Dawood’s Toward the Possible, an enigmatic parable of  alien visitation and seaside violence. We waited agog for the performance by Jalili Atiku that was promised for the Opening, entitled I Will Not Stroll With Thami El Glaoui, which was widely rumoured to include a number of live sheep. Frustratingly, it was cancelled at the last moment, owing, we were told, to fears that the sheep might fall off the paths into the water-filled basins. It struck me that this might actually have added considerably to our enjoyment, and I imagined dozens of angry moutons bobbing around in the ornamental pools as in a vast sheep-dip. The performance was cautiously relocated to the Jam3 al-Fna, outside the Banque du Maghrib, at 7 o’clock. We hot-footed it down there to see the sheep in a safe, pool-free environment, by now increasingly curious about the role of these woolly extras in the story of Pasha Glaoui. 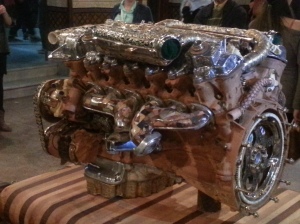 Arriving early, we went into the Banque du Maghreb, which was open as a venue for the Biennale. A fabulous building, normally closed to the public, it has a banking hall in zellij and carved plaster, with a high vaulted ceiling. In the middle of it was one of the cleverest, most provoking pieces of art I have seen for a long time. A car engine, constructed out of the most unlikely materials – wood, basketwork, zellij, repoussée silverwork, glazed porcelain, cork – a thing of the strangest, most unexpected loveliness. It is of course a conceit in self-contradiction, a machine that could never work, but draws eye and mind into questions of what it is telling us about precision engineering, Moroccan crafts, utility and futility, modernity and tradition. The notice on the wall tells the story, and it is so perfect that I shall simply quote it here:

Eric van Hove (b. 1975 BEL) … presents V12 Laraki (2013), the conclusion of nine months of work. V12 Laraki is a perfect replica of the Mercedes-Benz V12 engine used by Abdeslam Laraki in the Laraki Fulgara, Morocco’s first high-performance luxury car.  Laraki had hoped to manufacture the car entirely in Morocco, but was forced to import its engine from Germany.  V12 Laraki brings the dream of a Moroccan engine full circle. Each of its 465 components was handcrafted in 53 traditional materials, including ceramic, bone, tin, goatskin and terracotta, by 57 Moroccan artisans.  Both the V12 Mercedes-Benz and V12 Laraki are equal if non-transferable products of human excellence – the former of a hundred years of Western engineering, the latter of a thousand years of Moroccan heritage.

It is a simple idea, exquisitely executed in an object that is far from simple. The machine is beautiful – the crowds around it were thick and vocal and taking hundreds of pictures – and you want very much to run your hands over it. It feels a little as though it has escaped from between the pages of Jules Verne or H G Wells or China Miéville- a leftover from a transitional age when men and machines had a more intimate, less formal relationship. It manages to be at the same time a precise representation of the V12 engine in form and apparent function; but a wild and hilarious fugue upon it in material and functionality. It is an icon of disappointment – don’t be entirely fooled by ‘equal and non-transferable products of human excellence’ – which encapsulates the failure of Morocco to produce the engine that Laraki’s Fulgara needed. But nothing daunted by this apparent failure, it is a triumphant pis aller that transcends its original in quite another voice – a spritely substitution of craftsmanship, sprezzatura and cheeky humour for precision engineering. I’d infinitely rather enjoy Van Hove’s piece and drive a clapped-out old Renault 4 than own a Laraki Fulgara.

We came out into the darkened square, with the arc-lights burning over the food-shanties, and looked about us expectantly. No bloody sheep, and no explanation, so I’ll probably never know what the sheep had to do with the Glaoui; nor why it was that the author was so determined not to stroll with him. But on the plus side I can now cherish a humane, loving parable of Morocco that will give me quiet pleasure for a long time.

One thought on “To dream of an engine”