“It’s rather like being shown round the Pitt Rivers Museum by General Pitt Rivers,” said my daughter, as we left the Belghazi Museum at Bouknabel, on the Old Kenitra Road from Rabat. We had just had an extraordinary hour-and-a-half being shown round the Belghazi collection by M Mohammed Abdelillah Belghazi, its patron and presiding genius, and we were buzzing with impressions and quiet pleasure.

General Augustus Henry Lane-Fox Pitt Rivers inherited a great deal of money in the late 19th century, and built an enormous, rather idiosyncratic anthropological and natural history collection that he housed in a wonderful building in South Parks Road. I remember it as one of Oxford’s great delights, a treasure-house of amazing objects, rather crowded, oddly but often felicitously juxtaposed, full of surprises and amazements. My son, who is reading Human Sciences at Oxford and goes to lectures there, tells me that it has become a little more organized, but no less amazing.

The Belghazi family has done something rather different, and in many ways even more impressive. Five generations ago Mohammed Belghazi El-Outhmani was a professor of mathematics in Fes, the muwaqqit, responsible for the calculations that established the times and direction of prayer and the calibration of all the instruments; his son, Haj Mekki Ben Mohammed Belghazi, was an astronomer; his grandson, Haj Elmadani Belbekki Belghazi, a textile expert; his great-grandson, Elarbi Belmadani Belghazi was another textiles man, and in the present generation, Haj Mohammed Abdellilah Belghazi is a polymath, wood-worker, metal-worker, stone-carver, mathematician and scientific instrument-maker. Those five generations of Belghazis have been relentless curators, explorers and preservers of Morocco’s cultural heritage. They have collected, restored and explained an enormous range of objects – there must be many tens of thousands in the museum at Bouknabel, which is the centre of a network of five (along with Salé, Marrakech, Fes and Meknes). And they have also been master-craftsmen in their own right.

Today the power failed as we arrived at the museum, and we stumbled through the dark galleries by torchlight before emerging into the woodwork stores, flooded by natural light from the courtyard. There we saw every kind of architectural woodwork, offered to the Dar Belghazi for sale or found for them by rabatteurs, scavengers who beat the undergrowth in search of architectural salvage. Fascinating to see mediæval beams, Merinid doors, painted ceilings and gorgeous muqarnas archways hugger-mugger, alongside the masterworks of the Belghazi family – a desk made for King Mohammed V, a line of minbars made by Mohammed Abdelillah Belghazi at different stages of his career, photographs of the 27 domes he and his atelier made for the Great Mosque at Medina, a Merinid coach restored and used for his son’s wedding.

But most amazing of all are the water-clocks. If you’ve ever wondered, as I have, wandering down Tala’a el-Kabir in Fes, how the Dar el-Magana, the great water-clock opposite the Bou Inania madrasa actually worked, you have 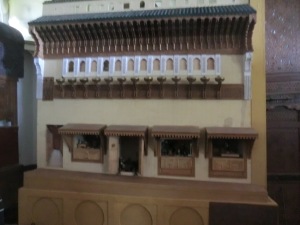 only to look at Haj Mohammed’s large working model. Here the brass bowls have been replaced on their brackets, and nozzles drop brass balls sonorously into them to mark the hours. The whole thing is driven, just as the original once was, by water pumped to a height, and falling. It must have made a thunderously merry tinkle. Across the room from the Dar el-Magarna model is another , this one of the Qairouyyine water-clock, an even more extraordinary, larger and more complex machine which you find yourself standing inside. It functioned too as an astrolabe furnished with the software – engraved on brass discs – to allow it to calibrate for any of the great cities of the Islamic world.

And last of all, hanging in the garden, what Haj Mohammed describes as the largest astrolabe in the world, an enormous construction in gold, silver, brass and copper that we found hanging from a pulley. It is huge, a behemoth among astrolabes, and it functions properly, and its master showed us how to sight along its bar.

Altogether a most  wonderful place, which we were privileged to be shown by its master, and I was put in mind of Prospero striding across his island.

Sometimes a thousand twangling instruments
Will hum about mine ears, and sometimes voices
That if I then had waked after long sleep
Will make me sleep again: and then, in dreaming,
The clouds methought would open and show riches
Ready to drop upon me that, when I waked,
I cried to dream again.