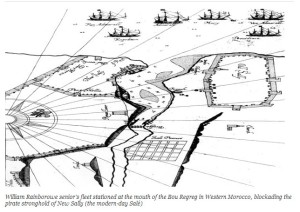 For Christmas my wife gave me a book called The Rainborowes, by Adrian Tinniswood. It’s a collective biography of a remarkable family of Puritan mariners and soldiers, turned politicians and revolutionaries, who straddled the Atlantic world of the mid-seventeenth century, with one foot in Wapping and the other in Massachusetts. But what particularly interested me (and the reason my wife bought the book for me) is the expedition led against Salé by Captain William Rainborough in 1637, to deal with the pirates of Salé – the ‘Sallee Rovers’ – who were damaging English trade in the Mediterranean, and attacking the English coast. Rainborough’s expedition is well enough known, and well described here; but inevitably an author with his eyes on a wider, transatlantic, canvas gives us less than he might on the extraordinary little conglomeration of fighting communities that the Englishman had come to punish. It is much too interesting a story to leave half told.

Ribat al-Fath had been dormant for centuries, a tiny, negligible settlement on the seaward point of the Bouregreg’s south bank, across the river from the ancient port of Salé. It occupied a corner of the thousand-acre walled enclosure built by Sultan Yaqoub al-Mansour in the 12th century, which had stood empty ever since. Only when Philip III began to expel the Moriscos (converted Muslims, many of whom continued a form of Muslim worship in secret) from Spain in 1609-10 did Rabat start to wake up. Several thousand Andalusian refugees arrived, looking for somewhere to settle. Salé – Old Salé – didn’t welcome them, so they crossed the estuary.

The first comers were a pugnacious bunch of Arabic-speaking arquebusier-hillsmen from Estramadura, who had left their town of Hornachos, ahead of the expulsion decree. They travelled en masse, with their weapons, their women, their moveable property and their gold, first to Tetouan, and then south to the Atlantic coast. Though the style of their observance, coupled with their fancy Andalusian ways, didn’t cut the mustard in the City of Saints for long, their ésprit de corps led them across the river to the ruins of Abdel Moumen’s old rbat, where they raised the castle which would become the Casbah des Oudaias. They were followed by a ragtag of less fortunate (or less successfully pugnacious) Spanish-speaking crypto-Muslim refugees from all over Andalusia, who settled in the mdina, and in due course raised the Andalusian Wall to protect their little corner of the massive old walled enceinte. The Hornacheros looked down their supercilious noses at the riff-raff across the Souq el-Ghazel, and came frequently to blows.

This set up a complicated triangular relationship between ‘Old’ Salé on the north bank, starchy old city of piety and learning; and ‘New’ Salé on the south bank, a bubbling cauldron of its own tensions between the two groups of adrenaline-rich Andalusians. All the Andalusians deeply resented the Spain that had expelled them, and saw revenge as a religious duty as well as a personal pleasure. Hence the rapid expansion of a very successful pirate business, aimed primarily at Spanish vessels but extending by analogy to Christian vessels in general. As for the two banks, Ken Brown quotes an old proverb, “Were the river to become milk and the sand raisins, a Rabati will never be friend to a Slaoui.” Rabat developed its own post-Andalusian culture of floral embroidery and painted woodwork, classical architraves and lightly arabised Spanish family names – a culture which is still visible today, and remains very different from Salé.

But they needed each other. Piracy was a burgeoning enterprise, hungry for skilled mariners, fighters and financiers. Manpower came from all three communities, as well as Christian renegades and underemployed pirates from the Western Mediterranean ports of Tunis and Algiers. Capital was provided by the Hornacheros and the Slaouis. The first decades of the new Rabat were a time of prosperity for all, as the concentration of the world’s trade routes moved from the Mediterranean to the Atlantic, making for rich pickings.

‘Sallee Rovers’ cruised not just the Straits and the African coast, but also further north. In 1635-36 they were particularly active in the Western Approaches of the English Channel. Six ‘Turkish’ warships were seen cruising off Land’s End in 1635, and two English ships were captured off the Lizard; in 1636, 42 fishermen were taken off the Lizard, and two fishing-boats within sight of the shore at Plymouth. A petition to the Crown complained of 87 ships taken in recent years, along with £96,700 worth of cargoes and 1,160 English seamen (though mostly not, of course, in home waters).

Rainsborough was sent as admiral of an expedition to deal with the pirates and to rescue English captives. His tiny fleet of three ships arrived off the mouth of  the Bouregreg in the summer of 1637, and found the three cities at war. One is tempted to add as usual, because there was precious little peace amongst them in the period between the arrival of the Hornacheros in 1610 and the final suppression of the independence of the ‘Republic of the Two Banks’ in 1666. As Janet Abu-Lughod puts it: The alliances shifted in unpredictable fashion, the game of tertius gaudens was played with consummate skill, and external powers entered at the invitation of one of the players, only to seek their own goals in turn. One long ding-dong, in other words, to and fro across the Souq al-Ghazel and the estuary.

When the English fleet arrived, the Andalusians had taken the Casbah and relegated the Hornacheros to the mdina; and after a period of fairly ineffective blockade – ineffective because his pinnaces, the only ships that could tackle oared Sallee boats close to the coast, had been left behind – Rainsborough joined forces with Old Salé to force the Rbatis to terms. He dug artillery trenches on the Slaoui foreshore and bombarded the Casbah alike, sinking several pirate ships, having at last been joined by his pinnaces. He also managed to rescue 302 captives, without paying ransom, and went well beyond his brief by negotiating a treaty with the Sultan in Marakech.

A good day’s work from an early English naval hero. Though as soon as he had gone, life returned to normal by the Bouregreg. The Hornacheros were allowed back into Rabat, but not the Casbah. Settling in the mdina, and presumably not much liking the view up the barrels of the Andalusians’ cannons, they rebelled again a few years later, recapturing the Casbah in 1644. And so on. But then the English were busy doing much the same thing themselves: 1644 saw the battle of Marston Moor which opened the North to parliamentary forces and marked the beginning of the end for King Charles. Rainsborough’s son John, seaman, soldier and Leveller, was fighting for the Parliament.

The next British fleet to anchor off the Rabat roads wasn’t until Robert Blake called, rather less successfully than Rainsborough, in 1655.