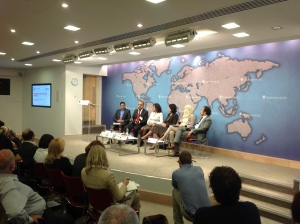 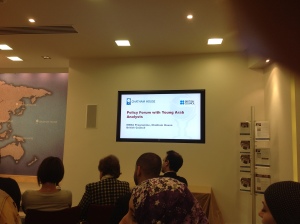 Early this year I attended an event in London which included a panel of young activists from countries across the MENA region. One of them was a vastly bearded, cheery and articulate Egyptian salafi from the al-Nour Party. Someone asked him from the back of the room, “Tell me honestly, did your party have any policies when it went into the elections?” With a seraphic smile and a shrug of his shoulders the whiskery young Egyptian replied, “Truthfully, No.”

That seems to me to be the predicament of the MENA region right now – a sudden rush of new actors in politics and society, but no tools. You can make revolutions without policy, but it’s close to impossible to build a better politics and a better society in the same vacuum. This is perhaps why the new regimes of the region, for all their radical rhetoric, seem often to be going on governing with little but the same set of visceral political assumptions as their autocratic predecessors, one pharaoh stepping into another’s shoes.

So about a year ago the British Council here in Morocco put together a project designed to teach young people ‘policy analysis.’ I find this phrase slightly daunting, and what we were actually trying to teach was how to think dispassionately and analytically about social and political problems: how to assemble evidence, test hypotheses, write convincing policy scenarios and then communicate them effectively. We did this with partnership from RIIA Chatham House, superb training input from Niccolo Milanese of European Alternatives, and funding both from the British Council and the Foreign Office’s Arab Partnership Initiative.

About half the young people involved were Moroccan (well, we had the idea and found the money!), and the other half came from countries across the region – Algeria, Tunisia, Jordan and Egypt. They sweated it out at policy boot-camps in Mohammedia, Tunis, Rabat and by the Dead Sea in Jordan. Between times they worked with mentors in their own countries, and with each other in transnational teams, on policy briefs, researching and outlining policy options in areas of their choice.

It wasn’t all easy going, and the learning curve was steep. One of the key issues – back to the young Egyptian I mentioned above – was the difference between policy and politics. Since the distinction exists in neither Arabic nor French, both of which use the same word for each of the pair of concepts, this was a tricky issue, and we found ourselves discussing it for many weeks. But  at last, there came a point, just when we were beginning to despair (as in all good fairy stories), when one by one the distinction became clear and was internalized, and after that progress was fast. The subtext of the whole project, of course, was empowerment, and here it came.

The analogy that struck me was the way Perrier water is treated at Source Perrier: first of all the bubbles are extracted, in an arcane and puzzling process for which I have no rational explanation; and then after the water (or perhaps the bubbles) have been scrubbed, they are put back together again. What we were up to was similar. First the politics were taken out of policy, and the policy refined, cleaned up and polished – and then they were ready to be put back together again. The results, along with all the technical skills that have been acquired, the confidence, the assurance and the determination to make a difference, are amazing. We can see the shape of a policy-driven politics, a real novelty for most of the region’s politicians; and a desperately needed elixir.

Last night we met to present the project one year on. One of the presenters, Asmaa Fakhoury, was asked by a slightly pugnacious questioner about her reactions to Revolution – how, the questioner asked, could intelligent young people not engage with the revolutionary impulse? How could they accept the way the Moroccan constitution was jobbed through its approval process? Well, said Asmaa (and I’m paraphrasing her from memory) that may be so, I don’t know. But what we are trying to do is something very different: it’s to get away from passion and noise in politics; and to try to assemble evidence-based recommendations for measured, rational, effective change. Only that way can commitment be translated into powerful, engaged, intelligent action.

Tremendous! That was when I realized we had done something rather special. And when I say ‘we’ I don’t mean the British Council, or our partners. I mean the group of 30 or so young people from across the region and – last night in particular – the dozen-and-a-half young Moroccans. Along with their mentors and trainers. Certainly the British Council was an indispensible part; as was Chatham House and our friend and mentor there, Claire Spencer. But the impact of the YAANI project, whether in the conference room at Chatham House last September, or in Rabat’s Golden Tulip last night, comes from the small group of young people with their bubbles put back in, who are marching away towards the future.

After the September event in London, when the programme of workshops was over, the Moroccan group sat down and decided what to do next, running a series of workshops and training sessions of their own with the Moroccan arm of FORMEJ (the Mediterranean Forum for Youth). They formed an NGO, which has the shape of a policy think-tank. It’s called the MENA Policy Hub (MPH – I love an acronym in an acronym!) and it is beginning to work on new projects. At the same time the young YAANIs have undertaken their own training of other young people in policy analysis, for major international organizations like UNESCO. And they are preparing to take part in the recruitment and training of another generation of YAANIs.

I am really very moved by the way this project has developed. I never expected (not in my wildest dreams) to find policy analysis emotional – but last night as I listened to the presentations, and the mature, enormously impressive handling of questions and answer, I felt that we had set something in motion that is already striding off into the future; a small but astonishingly effective contribution to the reintegration of politics and policy in this country and in the region. We have watched the creation of a small, high-impact organization which we shall soon be proud to partner.

There’s one more thing. You’ll notice that I haven’t mentioned what sort of policy they’ve been writing, and in what policy areas. That’s because it’s a whole culture, a process, an ethically defined toolkit, that we’re talking about. It’s none of my business now (fascinated as I am and shall remain) what sort of policy they are working on: that’s their call. I’m interested in how they do it, and how they change the thinking behind government over the next decade.

The YAANI website carries a growing amount of material, including the policy papers that were written for, and delivered at, Chatham House three months ago. Have a look at it. It’s at ya3ni.org, and there’s quite a lot of information there. If you look carefully you’ll find you can download their first volume of work, Policy for a New Generation.

One thought on “Putting the Bubbles Back in the Perrier”