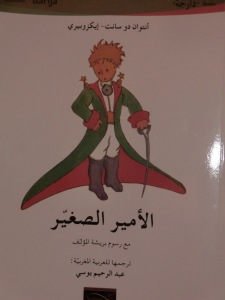 On my desk in front of me I have a copy of The Little Prince, or rather al-Amir al-saghir, translated into ‘Moroccan Arabic,’ by Abderrahim Youssi. I bought it a few weeks ago from a newspaper stall in Marrakech, more as a curiosity than anything else: I read Arabic only very slowly, and in ‘Moroccan Arabic’ written in Arabic script, my progress is glacial. But it’s an interesting and symbolically important little book, because it focuses for me a current debate on language that is going on in Morocco. Is there a national language? If so what is it – or rather what should it be? And how does it relate to that elusive creature, a national identity?

A useful way in is a polemique that has gone on in Morocco’s excellent new monthly history magazine, Zamane. It started with one of those slightly artificial interviews where two people argue on the page, under the headline Que faire de l’arabisation? (What’s to be done about arabisation?). The two polemicists were Youssi, who is both a professor of linguistics and a translator into ‘Moroccan Arabic;’ and Abdelkader Fassi Fihri, Director of the Institute of arabisation. The two of them came from the angles one might expect: Youssi arguing strongly for a written Moroccan Arabic – a standardised literary darija – and Fassi Fihri for a universal ‘Modern Standard Arabic,’ which he is at pains to distinguish from Classical Arabic – rightly, no doubt, though the distinction seems scarcely relevant to his argument.

The latest round in this perennial contretemps blew up with the cahier des charge for the audiovisual sector, which raised the question of increasing broadcasting in Arabic on TV and radio. This was always a likely move from the new PJD-led coalition, and arabisation has also been a long-term policy of the second coalition partner, the Istiqlal. However, the language question has evolved in the last eighteen months: the constitution of July 2011 guarantees equal rights for Tamazight, and as well as predictable cries of pleasure and dismay, this development has highlighted the rumbling question of Moroccan identity, and whether it is indeed an Arab identity, or an Amazigh identity, or something more nuanced and complex and Moroccan.

Fassi Fihri is at pains in the interview to depict Arabic as being on the defensive, and its proponents as simply looking for a restoration of its traditional place in Moroccan culture and society. He plays down the link with religion, and plays up identity, while attributing linguistic policy, historically at least, to the governing class: today, arabisation is, in his view, popular and democratic. He adds, disingenuously: “I don’t wish to enter into a political debate,” while doing just that, adducing linguistic democracy and the popular will.

For Youssi this is all nonsense. “We are continuing,” he says, “in a preposterous manner, to function on a linguistic framework which has been a failure for 13 centuries.” The two men debate the use of Arabic during the events of the Arab Spring and its popular credentials. Fassi Fihri cites massive use of Arabic on the internet and the flourishing Arabic press in Morocco: Youssi ripostes with a paragraph that is worth quoting in full (my translation):

As for me, I ask myself how large is the proportion of Moroccans who actually master the Arabic language. When we talk of figures, I’d recall that half of the population is illiterate, and that even among the part with the opportunity of going to school, there are perhaps 10-15% who master it and use it effectively and functionally. To take up again the example just cited [i.e. of the Arabic press], the principal Arabic newspaper has a print-run that is ridiculously small in relation to the population. It’s clear that this situation doesn’t promote culture and literacy. The written Arabic language is definitely not the mother-tongue of Moroccans. Look instead at the classroom and the television programmes imposed on young children. Just like French, Arabic is in terms of accessibility, a foreign language, which has acquired too much importance and too great a position in our society. As a result, the number of children who quit their studies during the primary years because they feel excluded, is alarming.

This seems to me to sum up the situation very well; and the equating of Arabic and French as two languages that are inaccessible and foreign to most Moroccans, is clearly right. Youssi talks of the sacralisation of Arabic, its closer and closer ties to religion; and he rebuts any suggestion that darija isn’t supple or expressive enough to do the job, with his own record of translation (All my experiments at translating into the Moroccan language have been successful, whether of Saint-Exupery’s Little Prince, or an English Romantic poem of the nineteenth century – The Rime of the Ancient Mariner).

What I find fascinating about this debate is quite how political it is, and how untransparent. Morocco has a rate of illiteracy of around 45% even by the indulgently minimalist standards used to measure literacy. Measured by easy reading, by comfort with, and pleasure in, a book, I’d guess that the figure is much greater, perhaps 80% or more. Whatever else one can say about this, it is a human and developmental tragedy; and it must have something to do with the language situation in the country. Particularly interesting is the fact that Abderrahim Youssi is one of few people who base their arguments about language on the question of literacy (Fouad Laroui is another: see my post on his book La Drame Liguistique Marocaine) – on what would make it easier for people to read, rather than what language they ought, for quite other and imperative reasons, to be reading.

And this is what seems to me as a foreigner, whose own native language is none of the half dozen historically in play in Morocco, to lie at the heart of the debate. The vast majority of discussion of the language question is about defending social, economic, literary or religious interests, not about how to encourage literacy and the accumulation of cultural and intellectual capital in Morocco. Arabic, however inaccessible to most Moroccans (mastered, as Youssi notes, by well under 10% of the population), is favoured by the religious and the traditional, Istiqlal and the PJD. It is the language of pan-Arabism and pan-Islamism, as well as – undeniably – a major vector of Morocco’s history, literature and thought. In addition, Arabic has clearly been a symbol of opposition to Francophone elitism.

French, on the other hand, is the language of the post-colonial, modern elite. Youssi writes: The example of the French Missions in Morocco is a good demonstration of this problem. Those children who have access to them profit from an unparalleled tool for social advancement. In due course they have access, automatically, to advantageous and senior jobs. Documenting this, a recent book by Moha U’Hrou Hajar (La mission Française au Maroc vs. La mission de l’école Marocaine) analyzes graduations from the Mission lycées and finds that since 1956, 200 families have provided 33.75% of the Moroccan graduates, 50 of those families supplying 21.36% and ten of them 9.84%.

For any country to develop effectively, literacy needs to be a common good, and this means that language must be understood as a tool, not an asset to be reserved, hoarded or defended. It seems to me that there are two quite separate questions: which language, functionally speaking, will most easily serve as a common written language, encouraging rapid progress against illiteracy? And which languages need care and attention paid to them for reasons of culture, history, religion, academic communication and shared heritage? The answer need not – indeed is very unlikely to be – the same. If it was, we might still be speaking Latin in Europe.

Of course in Morocco any linguistic future will involve several languages. Youssi’s Common Moroccan and the Common Tamazight that is growing and flourishing rapidly; and Arabic and French (quite apart from other foreign languages). Arguments must be about utility, about what is conducive to making Morocco a literate and reading nation. This, it seems to me, requires that the language which children speak at home, at their mothers’ knees, be the language in which they learn to read. Otherwise, it is all too clear, they do not learn to read. As Fouad Laroui wryly remarks, the only people who actually speak Arabic at home are Brazilian and Mexican telenovela – soap – actors dubbed for Moroccan viewers.

Arguments about history, culture, ethnicity and religion as determining the choice of language are topsy-turvy: children who read comfortably and fluently in one language – their mother tongue – will learn much more easily to read in others. This is not a zero sum game, though to many polemicists make it one.

Laroui quotes Mohamed Zainabi, editor of El-Amal, a magazine written entirely in darija: “In the suq Lakhmiss in Salé, I was thrilled to see shopkeepers who had never taken the slightest interest in the press, forget for a moment their businesses to read my magazine.”   That seems to me to be the point. In Turkey there’s a plan to give every child a Kindle to start them reading – reading is seen as the key to the future. In Morocco nationalistic and ethnically based arguments about language seem fated only to hold the nation’s children back.

One thought on “Language Wars”