“The Moroccan saddle was constructed of wood, shaped like a peaked roof with two exaggerated weathercocks at each end. On the ridge are some curious lumps, which come exactly where lumps are least welcome to any person of Christian build.”

Sir John Drummond Hay was writing of saddles for horses, but the same might be said – in trumps – of camel saddles, which are perhaps the most uncomfortable objects on which I have ever rested my backside for any length of time. They look and feel like a wooden vaulting horse, too wide for comfort (and I am 6’ 4” tall, so I speak with reasonable authority in terms of saddle-width), and with sharp edges inadequately muffled by a huge pile of blankets which slide about perilously, threatening always to deposit the rider in the middle of the erg. And of course, those almost metaphysical lumps. Camels themselves are not the most beautiful of beasts, so as you ride, wriggling about to find an elusive position of temporary comfort, teetering about on an unstable hillock of dirty blankets, they gurgle and splutter like a runaway coffee-percolator, often producing swags of green dribble. Enough.

Sir John’s saddle came to mind last weekend at church. I found myself at eye-level with the crib, the usual slightly saccharine collection of statuettes, jewel-bedecked and seraphically-smiled. But one thing stopped me dead in my tracks: the saddle on the King’s camel. Where were the lumps? Now admittedly Caspar, Melchior and Balthasar were Zoroastrians, and must therefore have had lumps in different places, but this King seemed to be travelling in the – as it were – lap of luxury. His parked camel was equipped with a throne of padded turquoise leather, buttoned like a chair in the smoking-room of a gentleman’s club. It seemed positively welcoming, despite the little wooden knobs which would apply a kidney-massage to a man of my size. Luggage hangs jauntily from it – a gigantic gold medal; a green velvet chest which looks suspiciously like a slightly tacky parting gift from MBS and probably contains over-gilt tea-glasses; a wicker picnic basket and a water-bottle, no doubt containing gin. First class travel.

The more I looked, the sermon gliding by only half-heard, the more I though of those terrific and vulgar touring motor-bikes that used to be popular when we lived in Rome with, well, buttoned leather seats set well above the level of the driver to give the passenger a good view of the passing countryside. Someone – I forget whether it was a common phrase or a family joke – used to call them poltroni volanti, or flying armchairs. If this is the kind of style in which the Three Kings travelled, it must have mitigated their hardships – “A cold coming we had of it / Just the worst time of the year / For a journey, and such a long journey.” But settled back in the poltrone wrapped in furs, with a gilt tea-glass of gin and a chocolate Bath Oliver from the picnic hamper, all might have been well. Refractory the camels may have been, but the royal bottom was well-padded.

On wandered my mind – the sermon was about St John the Baptist, but somehow the riding-posture of kings had rather taken over my imagination – and I remembered an image I’d seen recently, a cartoon in which the Three Kings arrive in Palestine, and the star progresses majestically across the heavens ahead of them. But their progress is blocked: a huge concrete wall severs the way to Beit Lahm, the work of the Israeli Defence Forces. Which is a salutary reminder that the real obstacles to long and difficult journeys for assiduous kings are not lumps, or sliding blankets, or the shortage of gin and Bath Olivers – but politics, and the injustices that deface the ‘Holy’ Land. 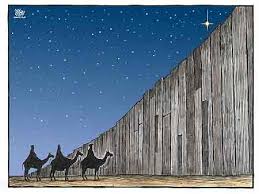