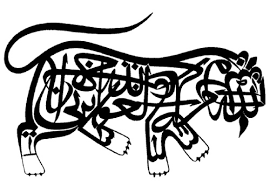 In most cities of the Middle East and North Africa, you’ll see displayed on stalls and in shop windows, artful texts, usually from the Qu’ran, of words distilled into pictures – of horses, or ships or praying men, their shapes picked out in the fine shading of word used as image. They can be very beautiful, or dreadfully banal, but they are a very particular Islamic art-form. In front of me on my desk I have a small pendant sikke, or seker-avis destar, the dun felt hat of a Mevlevi shaikh, a brass thumbnail thick with densely interleaved calligraphy. This pictorial richness offers a clue to the importance of calligraphy in Islam, and while there is certainly a motivation in avoiding what could in some circumstances be an impious image, in favour of the exalted word, this is far from the whole story. Yasmin Ghata writes of creating – or writing – just such an image,

The stem of the reed rubbed its belly against the blotting paper, and turned round on itself. The groove in the tip became invisible to the naked eye, and was slowed down by the ink with which it was loaded. The tip set itself down obliquely on the paper and the trance continued. The opaque black colour submitted to the enchaining of letters, in a shapeless script. Before my dazzled eyes, the phrase inscribed on the dervish’s headgear spread out: ‘Oh our sweet Jalal al Din Rumi.’ The act of writing is an act of devotion in itself.

In Turkey unlike anywhere else in the Middle East, the script has been ripped from its cultural womb by the forcible replacement of Arabic with Latin script. “God,” writes Ghata, “is not interested in the Latin alphabet. His dense breath cannot skim across those squat, separate letters. Ataturk has driven God out of the country.” It was forbidden for the remaining calligraphers to write in Arabic. “Muhsin would try to resist, but the temptation was too great, and he would write verses of the Koran on the misted-up windowpanes of his bedroom, while a kettle steamed …” This unresolved trauma of cultural and religious amputation is still playing out in Turkey’s culture wars today.

The act of writing is itself a mystical experience, in which devotion and artistry become inextricably blended, in Ghata’s lovely novella, The Calligraphers’ Night, through the medium of a dead calligrapher who haunts the thoughts, and splenetically guides the hand, of the writer. The physical materials themselves are deeply significant, as are the instruments, and Selim, the dead calligrapher who inhabits the narrator’s life, does so through the gift of his writing materials, pen-box, knife and a flask of golden ink. Ink is profoundly important.

The time the ink took to dry, writes Ghata, corresponded to the time one needed to wait for a visit from the Most High: no more than a minute in winter; a few seconds in the summer, with its heavy, stifling heat. Calligraphers never blow on the ink: accelerating this drying process is the same as expelling this divine presence – so I would slide the fleshy part of my index finger across the paper, a drop of flesh on the wet ink that grew smaller as one watched. Calligraphers have all tried to seize this divine presence, but none has ever succeeded. And as Haydar al-Amuli wrote in the fourteenth century, “What really and concretely exists is nothing but the ink. The existence of the letters is in truth no other than the existence of the ink, which is the sole unique reality that unfolds itself in many forms of self-modification.

This mystical connection between writer and  written resides not just in the materials, though qalam, makat and ink are all links with the divine. Deeper still there is an arcane symbolism which sees the letters themselves as significant in ways that transcend, or subsume, the text, freighted each with its own significance. A recent writer describes hurufism, the strange, recondite science that preoccupied Muslim thinkers intermittently from the tenth century onwards, when hurufists, or ‘Lettrists,’ like Sharaf al-Din Yazdi, practised an occult science of power:

Lettrism was concerned with the hidden significance of the twenty-eight letters of the Arabic alphabet and their corresponding numerical values, especially the mysterious isolated letters that preface some chapters of the Qu’ran. Lettrism was the medieval equivalent of a theory of everything, and practitioners like Yazdi believed that, by manipulating the letters in conjunction with astrological speculation, they could grasp the hidden meaning of Scripture, access the secrets of the cosmos, and even influence the course of events.

That’s quite a claim for an alphabet (and biblical numerologists have not dissimilar fancies, though obsessed with text and not form), but is particularly pressing because of the way Muslims imagine the Arabic script. The Qu’ran ‘exists’ only in Arabic (pace Ataturk) and is coexistent with the language and letters in which it is written. A translation is not understood as being the Qu’ran at all, referred to, like Marmaduke Pickthall’s, as The Meaning of the Glorious Koran, an explanatory tool rather than the thing itself. The act of copying the Qu’ran is intrinsically devotional and very powerful. “The Muslim who could copy the Koran was considered cennetlik, a candidate for paradise.” And hence the miserable half-life of the

calligraphers in Ghata’s moribund scriptorium, full of words they were not allowed to write, with the key to heaven kept forcibly mute.

There is a short and luminous essay by Annamarie Schimmel in which she discusses just this, the place of the alphabet and its beautiful execution through calligraphy, in Ottoman sufism. The mystical beliefs of the different sufi tariqas are wrapped in the alphabet. The Mevlevis, she tells us, “excelled particularly in nasta’liq … because their favourite occupation was to copy Mevlana’s Mathnawi [in Persian], a work of some 26,000 lines that took them at least a year. The Mevlevis were also aware of the close relationship between calligraphy and music: both the reed pen and the flute [ney] are made of the same material; both are cut off from the reed-bed, like the soul that is cut from its primordial home and longs for it. The flute expresses this longing in undulating sounds; the pen, in beautiful lines of calligraphy.” But it was the Bektashis who developed “a very specific kind of calligraphic picture … the art of putting meaningful phrases in a pictorial frame. This device … playfully turned letters into animals, plants and even human figures.”

The alphabet itself is hugely important, the letter-shapes distilling – and originating – meaning. So, alif, with its numerical value of one, the unity, originates in “the primordial dot,” and the fundamental role of the ba (value two), the first letter of the bismillah that begins the Qu’ran, “the first step from Absolute Unity into creation, with its divisions into male and female, good and evil, day and night, for its numerical value is two.” Of it the Imam Ali, “the source for most of the chains of initiation in Sufism and also in calligraphy (and to whom the Bektashis were particularly devoted), claimed ‘I am the dot beneath the ba’ – that is, the real beginning of the world in time and space.” The mysticism of the sufi way, and the mysticism of writing, are intricately entwined. Yasmina Ghata writes of the continuation of the tradition in new ways, and new forms in the aftermath of Ataturk’s language reforms, leading ultimately to techniques and designs which the predecessors of her heroine, Rakkat Kunt, would have found hard to swallow.

My thick, broad brushes left straight furrows behind them. I used my fingers as knives, and wood had replaced my paper. No more fine, virtuoso writing; my letters were becoming vigorous, multiple. My lines broke and shattered, arched their backs as my mood changed. I unwrote, pulverised the line and took control of the empty space. Broken, all the taboos of this science, and its rigid rules defied.

This is the renewal of tradition, the courage to seek out new forms in a rigidly traditionalist art while preserving and deepening the spiritual essence: calligraphy can translate the sensibility of  a new era; it is not frozen in time and must continue to evolve. The line of calligraphers goes on forever and ought to continue to the end of time. They alone are able to establish a dialogue between God and human beings. 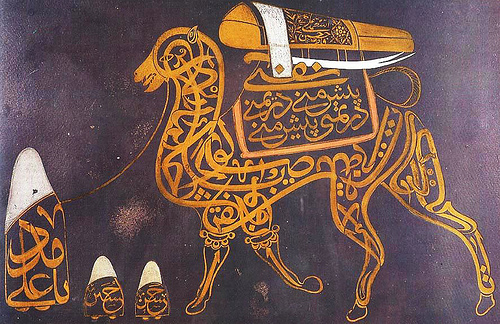