Saddam Hussein has been on my mind lately, owing perhaps to a confluence of reading and film, and the recent publication of a book of my own about my family’s time in Iraq at the beginning of the first Gulf War. The reading was of an interesting book by a former CIA officer and Iraq Leadership Analyst called John Nixon, entitled Debriefing the President – Nixon (who made the formal dentification of Saddam) was the first debriefer to get access to the ex-President, between October 2003 and the end of that year. The film was National Geographic’s The Real Saddam Hussein, which told the story, breathlessly and rather superficially, through the interrogatory eyes of George Piro, the FBI agent who took over interrogation on New Year’s Eve 2003. And the cherry on the icing was a second look (with all due filmic caution) at the Sean Penn film Fair Game, about the blackguarding of Joe Wilson, who had pointed out that George Bush’s evidence of Iraq’s acquisition of yellowcake uranium from Niger was a deliberate fake. Taken together there’s an interesting story here, and it’s only tangentially about Saddam (interesting though some of the tidbits are): it’s about US intelligence. Or rather, the absence of it.

On the other hand, Piro, an Assyrian-American, did at least speak Arabic, while the CIA team used an interpreter (“Ahmad, our interpreter [was] the only Arabic speaker in the interrogation facility”). There was clearly a serious case of inter-agency (not to mention intra-agency) hostility, presumably not good for intelligence, particularly since the Plods got the lions’ share of the time, and the Spooks were trying to “get inside Saddam’s head” without speaking Saddam’s language. The whole thing seems staggering amateurish. “The CIA was woefully unprepared on Iraq.” So it appears. The CIA’s Iraq Survey chief Charles Duelfer comments without apparent irony: “As an intelligence community, analysts in Washington, we failed to appreciate what role Iran played in Saddam’s picture of the world.” Bit of an omission that, after an eight-year war between the two neighbouring countries. “As Americans, we tend to want to see things in black and white,” which is of course fine, but Duelfer, Nixon and Piro were not just Americans, they were intelligence agents.

And what was the crucial information that they were both determined to get? It boils down to the two simple questions to which Washington was desperate for answers: did Iraq have Weapons of Mass Destruction? And did Saddam have a relationship with al-Qaida? These were certainly pretty crucial questions (the President of the USA had staked his personal credit on the answer to both questions being Yes – because this had been his justification for going to war) though of course as we know now and many at least suspected then, the answer to both questions was actually No. Odder still is the huge excitement about what were negative answers. When Piro extracts the answers to the two questions – No and No – he seems to believe them and, as he puts it of Question 1: “Saddam told me he did not have weapons of mass destruction.  I couldn’t wait to get out of the room … he had solved the mystery of Iraq’s WMD.” Doh? Because Saddam said so? If it was that simple, I am not clear why they hadn’t reached the same conclusion before the war. It would have saved a great deal of blood and treasure. Similarly for Question 2: Saddam opined sagely “Osama bin Laden is a religious zealot, George. Politics and religion should remain separate.” That’s it? Well that certainly solved the mystery of Saddam’s relations with OBL.

The White House was not asking ‘open’ questions: desperate for answers Washington may have been, but only if those answers were Yes. As we know from the Joe Wilson story, certain of the President’s very senior staff were entirely happy to lie, bully, forge evidence and break federal law in order to keep alive the fiction of WMDs. So why should a negative answer, inferred but undocumented, have the slightest purchase? Who was going to tell the president? Joe Wilson’s experience suggests that the Emperor could get quite snotty about being told that he had no clothes. Wilson at least knew what he was talking about on yellowcake – but you have to be pretty brave to challenge the forceful views of the White House on the basis of an unsupported assertion in the negative by an imprisoned war criminal. On this subject Nixon is restrained, but notes that “the policymakers at the White House and the leadership on the seventh floor at the CIA didn’t want to hear that many of the reasons for going after Saddam were based on false premises.” I suppose that would make telling them quite difficult, so what was all the revelatory interviewing actually for?

What is going on? The product of the interviews with Saddam seems largely banal (though it is of course quite possible that he was voluble and revealing on all sorts of subjects that the interrogators don’t report at all). The redaction of Nixon’s book with black blobs suggests 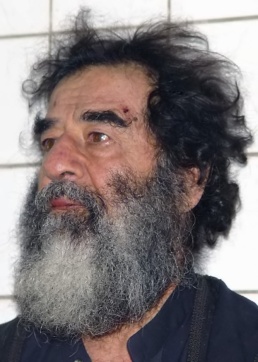 (as is presumably intended) that the juicy bits have been removed and there’s lots of ‘real’ stuff that we can’t see, though quite a lot of the blobs clearly conceal nothing more than names, embarrassment and paranoia. Nixon’s account has some interest and many small gems: Piro’s (at least on the evidence of the National Geographic film) very little at all.

What they both do is a good deal of “getting under the skin,” apparently believing that Saddam actually liked them, and that they were too clever for him. Piro describes it as “a psychological chess match,” and Duelfer says a little melodramatically, “How do you get into the head of Saddam Hussein? The person who was going to do that was George Piro.” Piro in turn quotes with pride Saddam’s saying to him “You are a tricky bastard.” Nixon and Piro both worked obliquely through conversations on poetry and history, and lots of cross-checking of speeches and accounts of the same incidents that Saddam described. Disappointingly, Saddam turned out to have forgotten a good deal, to have been rather detached. “… in his final years Saddam had begun to disengage from running the country and was mainly occupied with non-governmental pursuits, his writing chief among them … as the U.S military prepared to invade Iraq … Saddam was sending the latest draft of a novel he was writing to Tariq Aziz to critique.”

And of course the interrogators were adept at barking up the wrong tree. There’s a nice moment described by Nixon, who has just told Saddam how US analysts looked with special attention at editorials in the newspaper Babil, owned by Saddam’s revolting son Uday, because he was obviously a key source of insight into his father’s thinking: “What does it matter what my son says?” answered Saddam. “Was he a member of the governent? No.” And when told that “some people in our government still thought that Uday spoke for him … Saddam just laughed and rolled his eyes.” As well he might.

We have always known that Saddam – with a short exile in Cairo in the late 50s and two visits to Paris as Vice-President – was dangerously ignorant of the world. I described him in my own book as “a geopolitical autist,” and this turns out not to be far off the mark. Nixon has this fascinating and extraordinary anecdote:

Saddam made a comparison between the Iraq War and the American Civil War, explaining that the reason the South lost to the North was that the Confederates had to fight going uphill. I could not understand what he meant and asked him to clarify. He pointed to a map and said that because the South was below the North, it meant the Southerners were always fighting a foe that was literally above them.

Hundreds of thousands of Iraqis, in other words, died in a war instigated by a man who thought that the topography of the battlefield was determined by the compass. He must have viewed Kurdistan with some apprehension, both geographically and metaphysically uphill as it was from Baghdad. But ignorance was a common commodity in Washington as well as in Baghdad, and Bush was more like Saddam than he would have cared to be told: “One of the great ironies of the Iraq War was that brutal dictator Saddam Hussein and freedom fighter George W Bush were alike in so many ways.” Both were “fairly ignorant of the outside world and had rarely travelled abroad;” both were solipsistic, ideological leaders who were by their own admission, “gut-players, politicians who trusted their instincts rather than their intellect.” And of course each was a disaster for his country.

This story is one of the perversion of intelligence-gathering to support ideologically driven preconceptions and decisions taken without rational underpinning. It illustrates with awful clarity what happens when intelligence is sought and interpreted simply to support policy that has already been made. But it seems to be the way of the world.

John Nixon’s book is published by Bantam; mine – There and Back by Candle-light – is published by the Cygnet Press, and is available from a select few London bookshops, including Heywood Hill and John Sandoe.