At the beginning of 1973 I spent a few months in Cairo. War with Israel was in the offing, and preparations for it were under way. At the most mundane level, blast walls were built in front of the entrances to blocks of flats, and windows taped; at the Egyptian Museum Tutankhamun’s mask and regalia were protected by a thick emplacement of sand-bags and only visible with a flashlight, through narrow slits. One day in January or February that year I went to the Cairo Palace cinema off Alfi Bey Street to see Costas Gavras’s splendid film ‘Z’ about régime murder and cover-up under the Greek dictatorship. It was only shown once – the High Court had over-ruled a government ban, and ‘Z’ got just one token outing before the authorities closed the cinema and stopped it being shown again. For that one show, the cinema was surrounded by a cordon of riot police, an irony not lost on the unusually silent audience.

Before the screening of the main film, there was a black-and-white public information short, instructing the audience about how to deal with napalm attacks. Two bored soldiers stood in a slit-trench with their helmets lying on the sand-bagged parapet. Suddenly from off-screen dropped a great blob of what looked like egg-white, or snot, landing on one of the soldier’s helmets. At once, all was action. The soldiers jumped to, tipping sand over the (still obstinately not-burning) jelly, and the military equipment was vigorously and demonstratively saved from destruction. And that was that. It was an odd enough little vignette to remain in my memory 42 years later, a gloriously inept attempt to enjoin vigilance without too much panic, a paranoia sanitized to the point of meaninglessness.

This week I found on my twitter-feed a story (from Mada Masr) that brought it obliquely back to mind: In June 2012, paranoia against foreigners was already at an all-time high when an infomercial aired on both state-owned and private television channels warning people against the spies around them. The 40-second ad featured a blue-eyed man with a suspicious look on his face scanning a café, then sitting with young men and women who start to tell him about Egypt’s problems as he squints and flashes evil smiles. The narrator warns that the spy will blend in and “steal your heart” until you offer him valuable information. The spy in the video exclaims “Really?” in English as the gullible young people divulge information. He then proceeds to send text messages from under the table. The ad ends with the warning, “Every word is valuable, a word can save a nation.”

This ‘infomercial,’ issued just as Morsi took office, comes from the same stable. Foreigners, particularly those with blue eyes and agile texting-fingers – are a Bad Thing, determined to undermine Egypt.  A short and delightful visit to Cairo last week reminded me that distrust of the West lies only a little beneath the surface, and that a cultivated paranoia is part of the package by which the government, like all Egyptian governments, seeks to consolidate its support. However, as the man in the old joke said, “I’m not paranoid – it’s just that everyone’s out to get me;” and there really is quite a lot to be worried about in Egypt.

It was certainly a very difficult week, beginning with Revolution Day celebrations in which a blameless teenage girl was shot on Talaat Harb while carrying flowers to a commemoration in Tahrir Square. Another twenty  people, some of them considerably less blameless, were killed at demonstrations during that weekend, and a number of bombs exploded. Later in the week there was a devastating rocket attack by terrorists on army positions in the northern Sinai, in which another 30 or so soldiers – plus a number of Islamist expendables – were killed. It is clear that the Egyptian government and state are under attack, and that there is justified fear and serious concern. The murky nexus of the Muslim Brotherhood and the Daech represented by their myrmidons of Ansar Bayt al-Maqdis, is behind both domestic and external violence.

But there are no shades of grey in the cosmic war being fought out between the legions of hell and the boys in khaki. One is Right: the other is Wrong – which is which depends on your viewpoint. Accounts of atrocities by the army are regularly discounted on the basis that the only evidence for them is the foreign press which can’t be trusted, because it is sympathetic to the Brotherhood. And the Brotherhood’s infernally cunning operatives are said to fabricate enormous amounts of evidence, placing stories in the press and online to discredit the government. (Probably so, and I imagine the compliment is returned.) So I was told variously that I shouldn’t necessarily believe the story of mass treason convictions in Minya after a 20-minute trial (despite the newspaper reports); nor that the unfortunate Shaaymah al-Sebbagh was shot by a riot policeman (despite the film of the incident on YouTube).

But what I found most striking was the widespread belief that Western governments and the Western press support the Muslim Brotherhood. I think the Manichæan binarism of chaos and order has become a filter for virtually all information and opinion. It isn’t possible, ultimately, for a Western journalist or leader to condemn human rights infractions by the Eyptian army or government, without ‘being’ a supporter of their Islamist nemesis. You’re either with us or against us. All sorts of straws are adduced, meetings at State Department, the toleration of Brotherhood supporters in Western capitals. But I found it hard to begin to get my head round the belief that our governments support violent Islamist extremism. The opposite is true, whatever one may think of the actual policies that shape Western actions.

The opposite is true, and how could it be otherwise? All the countries of Western Europe are struggling with their own blowback from the Syrian-Iraqi wars and are desperate for Arab support in their reactions there. In Egypt, they find an uncompromising military government which is determined to break the Islamist insurgency, and of course they support that. The problem is one of method and style. At home in Europe we agonize, with endless argument, over how to confront Islamic militancy within a framework of human rights. In the Middle East there are fewer scruples about that framework, and this is a problem for our press and governments. Imprisoned journalists, mass treason convictions, wholesale killings and dead teenagers don’t prevent the West supporting General Sisi – they just make it uncomfortable and embarrassing. Writing in The Guardian this week, Ian Black is closer to the mark:

Sisi did not have to wait long for Western approval after he was elected to replace Morsi. In the last year his government has worked hard to burnish his and Egypt’s image. The growing insurgency in Sinai, now linked directly to Islamic State (ISIS) has helped too. Sisi was feted when he attended the World Economic Forum in Davos last month.

That the Muslim Brotherhood is a violent organization bent on overthrowing the Egyptian state (for starters) is quite clear. It is also profoundly dishonest and speaks with a decidedly forked tongue, as this screen-grab of two rather contradictory and simultaneous ‘official’ Brotherhood tweets (assuming it to be genuine) demonstrates: in English (@Ikhwanweb) the writer is all condolence for the dead soldiers’ families and soft soap, “We unequivocally condemn all acts of violence.” In Arabic (@IkhwanwebAr) he talks of “settling accounts for the blood of martyrs and prisoners,” and “the revolutionary reckoning awaiting tyrants.” Odd twittery bedfellows. 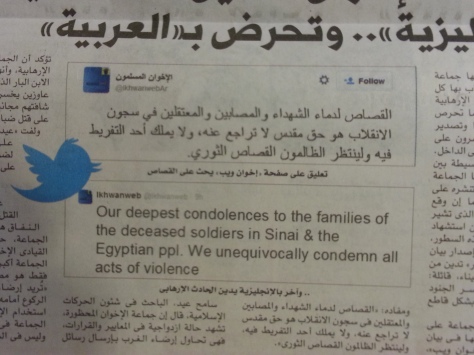 But there does seem to be a marked reluctance to let the truth do the heavy lifting and drive out the lies. Peter Greste of Al-Jazeera was released this week after 400 days in prison for reporting the Brotherhood. Part of a foreign – in this case Qatari – plot. His detention did infinitely more damage to Egypt than his ephemeral reporting, which would have been forgotten in 24 hours. I am not clear whether he has blue eyes.

I was pondering all this when I saw the papers at breakfast last Sunday, from which I take the two Brotherhood tweets. Something else was also very striking, the appropriation of the language and discourse of the Tahrir revolution. Al-Bawaba (outside whose Mossadeq Street offices there was reportedly a bomb earlier in the week) headlines in Arabic, against a background of army camouflage-fatigue, KULINA GEISH, ‘we are all Army.’ Quite legitimate (after all, half Europe is Charlie, and most of Jordan is Muadh), but a strange and uncomfortable echo of KULINA KHALED SAID, the website that laid much of the groundwork for the revolution in 2010-11 by focusing national identification with an Egyptian boy beaten to death by police.

Perhaps even more amazing is the smaller strapline above, which says ASH-SHA’AB YURID MAGLIS HARB – ‘the people want a Council of War.’ Amazing not for its sentiment, but because it picks up the urgent rhythm and words of the chants in Tahrir Square and on marches in Janaury 2011, ASH-SHA’AB YURID ISQAT AN-NIZAM, ‘the people want the fall of the regime.’ This is the insistent rhythm of the revolution, words chanted across the streets and squares of the Arab World in 2011, but tracing their origins to the Tunisian poet Abu al-Qasim al-Shabbi and the first national anthem of independent Tunisia. It is hard to imagine protest in North Africa without this chant, and its assertive claim to ownership of the Will of the People. As Elliott Colla wrote of its universality a couple of years ago, “The logic of repertoire says nothing about the coherence or truthfulness of these claims – it respects only success. Given the success of popular claim-making, no party to the revolution can afford not to speak in the name of the people, and it is unlikely that this slogan will disappear anytime soon.”

It hasn’t. And it has become a part of the gathering solidarity of Egyptians behind their leader and the struggle against violent disorder. They have seen what that ideologically driven government brings, and they don’t like it. (Nor does any civilised person, anywhere.) One can only sympathize, while hoping that it will gradually become easier to focus a little more exclusively on the bad guys. Kulina geish, indeed.