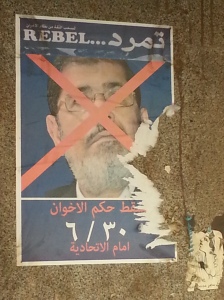 Cairo, where I have just spent a few days, grows much shabbier, the pavements prolapsing, the road-surfaces ridging into lethal berms at junctions; walls are covered with posters and stencilled protests and in memoriams; traffic is worse than ever, reaching in many parts of town an almost terminal constipation. Power cuts are becoming common, and water supply erratic. A friend of mine who has lived there for 60 years speaks of his home as Zamalek El Balad. And yet, for all that, it is a pleasure to be back in Cairo’s slightly sticky heat and to listen to the cacaphony of political debate, often vacuous but always vigorous. Some sort of crisis is brewing with growing rancour between an opposition that seems finally to be achieving a kind of, if not unity, then at least clotting-power, under the inelegant moniker of Tamarod; and an increasingly high-handed president who many sane, if fevered, middle-class Egyptians seem to think is plotting Armageddon. There is much talk of June 30th as a day of action, allegedly huge petitions and a great deal of fly-posting. The anti-Morsi posters seem in the town centre to outnumber the pro, though I doubt this has great psephological significance

I was tempted to read more, as I walked one evening around Clot Bey and the Ezbekieh Gardens (gardens no longer), into the fact that there are vast numbers of electric beard-trimmers on sale. I must have seen hundreds, laid out on street stalls, mostly of industrial quality. Could Egypt’s liberals be tooling up to deprive their salafi compatriots of the pious vegetation on their chins? I recall the story of the salafi amir who reportedly, soon after the revolution, launched a campaign called ’80 Million Beards,’ only to be reminded that some 50% of Egypt’s population are constitutionally ill-equipped for beard-growing.

The story of the week, though, is the occupation of the Ministry of Culture in Zamalek by intellectuals and artists, frothing with outrage at Alaa Abdel Aziz, the ikhwanji Minister of Culture, who has dismissed the heads of all the state cultural agencies from GEBO to the Opera and the National Library. Resignations followed, in protest – but also perhaps in recognition of the writing on the wall. Now this kind of purge does on the face of it seem high-handed and rather unattractive, but it also raises some interesting questions about state control of culture, and about the assumed virtues of the functionaries who have, doubtless to their own and their friends’ distress, been pensioned off. Ministries of Culture are an oddly bossy notion, reminiscent of Babar’s Celesteville, and given the very specific understanding of the nature of culture by the Ikhwan, it never seemed very likely that they’d leave Mubarak’s placemen in their places. The outrage is largely amour propre and puffery, I suspect.

So anyway, I was delighted to find an article rather along these lines in this week’s Ahram Weekly, by Youssef Rakha. It’s called The parable of the riots and the intellectual, and tells the story of a figure called just ‘Intellectual,’ in bunyanesque fashion, whose course through revolution and its aftermath is based, essentially, on vanity, self-aggrandisement and the avoidance of personal risk. “Intellectual,” a composite perhaps of some of the partying cultural panjandrums occupying the Ministry, “saw both power-seeking and nutjob religiosity socially, as Backwardness: bad; or he saw them politically as Resistance to the World Order which supported Israel and the old rulers: good. But whether from within or outside the government – and Intellectual had a foot in each space – he did very little to see, confront or, Allah forbid, imagine changing society: culture, reality, the world as it becomes, were of no interest to him so long as his own Culture was happening, however isolated it must remain from the vast majority of people.”

Now, Rakha goes on, when the pass has been sold and the battlefield evacuated, Intellectual decides to occupy the office of the newly appointed minister. There is good reason to be alarmed, though it is not new and has evidently required the purging of cronies in order to get Intellectual’s blood up. “But what about the fact that Culture within the State has always succumbed to religious pressure anyway, that nothing of any importance has come out of the Ministry in recent memory, that the ministry has always been corrupt and ineffectual? And since the cabinet of which the new minister is part was appointed by the new rulers, what on earth does Intellectual expect?” He concludes, “Psychosis is defined as a loss of contact with external reality. And where external reality consists of a dysfunctional government, nutjob fundamentalism and purposeless rioting … will anyone but a complete psycho think to show concern for the future of ballet?”

This is a vital question across much of the region: what is culture for, and who owns it? Ballet is a Good Thing, of course, and to be cherished; but it has a wonderful irrelevance to the great cultural questions of 2013. Under Nasser there was a genuine and often successful, if uncomfortably centralized, effort to bring culture to the masses across the country; as entropy eroded the 1952 Revolution, culture became both stiflingly bureaucratised and very corrupt, just as it became arrogated to the regime and its pursuit of international celebrity endorsement, glitz and reflected starshine. This isn’t, though many would like it to be, the culture of the majority of Egyptians which (as Intellectual would perhaps shudder to admit) is a mite closer to Mr Abdel Aziz’s conservative, unambitious and piety-based kitsch.

Between Celesteville culture and cosy kitsch there is, though, a third way. It’s not comfortable and it’s often not beautiful but it certainly is expressive. It gets spray-painted and stencilled on walls, sung in cafes and at open-air rallies. It is the raucous, disrespectful, grating, energetic and exciting art that has emerged since the Revolution, from its youth. One very striking thing, returning to Cairo after several months away, is that quite a lot of the street-art is disappearing (though I am told it is being carefully recorded). And who is disappearing it? Close to where I have been staying in Zamalek is the Faculty of Fine Art. When I was last in Cairo, its outside walls were covered in swaggering political murals, many of startlingly high quality. They have all gone, covered over by officially sanctioned and spectacularly dull mosaic panels.

Meanwhile back at the ministry, the party continues. I do rather hope that it wasn’t Intellectual who had the graffiti covered in mosaics. Either way, the stakes are not very high at Celesteville’s Palace of Art and Culture, when down the road in Babar’s palace Rataxes holds court, and the electric razors are out.