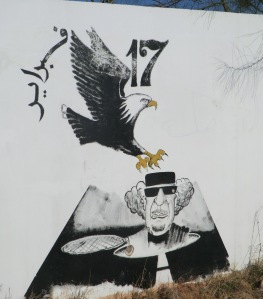 February 17th is the anniversary of the Day of Rage in Benghazi which kicked off the Libyan Revolution in 2011. It’s the iconic date that peppers the graffiti on Tripoli’s walls, the placards commemorating the dead of the revolution which hang in the streets, and the tourist mementos sold in the medina. This presumably lies behind the flurry of overblown security warnings last week that almost led us to cancel our visit to Libya. Everyone seems to expect a busy Day of Rage in Benghazi, and perhaps in Tripoli too. But behind the rage are the politics, the hopes and the justified impatience: it was a strange counterpoint to the apparent calm of Tripoli to watch on television Tunis erupting after the assassination of Chokri Belaid on Wednesday.

Like any first-time visitor to Tripoli I marvelled at the traffic (indescribably anarchic, even by Moroccan standards), admired the roadsides (which recalled Bill Bryson’s description of Rome as ‘looking like the aftermath of a parking competition for the blind’) and photographed the exuberant graffiti, mostly showing the Brother Leader in an endless variety of splendidly undignified poses. But I was not encouraged to wander – we were carefully looked after, driven everywhere and returned safely to our hotel before dark, like delicate pieces of china.

Tripoli is not a beautiful city, a rather shabby version of Catania, endless streets of breezeblock walls and haphazard buildings (probably hiding, like Catania, great wealth behind mean exteriors), punctuated by a few skyscrapers. Many of these are vacant or half-finished, products of the corruption and utter disorganization of the Gaddafi years. The country combines vast wealth, virtually non-existent management and political structures, and bizarre infrastructural vacuums. There are big things missing, like land registries, traffic direction and public security, but also smaller ones. One colleague is resitting exams for his BA because the paper records of several he sat and passed have vanished, and no electronic records were kept – this in the university’s department of e-commerce. By the same token, my check-in at the airport consisted of writing my name in biro on a photocopied list, and being given a hand-written boarding-pass. I wondered often quite what Libya’s oil money was actually spent on (with a slightly weary sense that it’s all too easy to guess).

The real energy of Libya today, though, is in the extraordinary feeling of elation and moral vigour that many of its people have about them. Another colleague said to me, “It’s not just that we’ve overthrown a dictatorship – we’ve wiped it out as though it had never been. No one talks about Gaddafi – and it’s a great pity so many of the books about the revolution seem really to be about him more than the tuwar who overthrew him, and what has happened since.” Many people commented on the way the revolution was in some ways a picking-up of stitches dropped 42 years before. As the editor of the Libya Herald told us, “Look at the family names in the pre-1969 parliament and in today’s assembly, and tell me that old Libya is not coming out of hiding.” And look, as one does ten thousand times a day, at the Libyan flag, the red-green-and-black with its crescent moon and star – the flag of old Libya, illegal under the Ubuesque rule of Gaddafi, but then the instantly universal  icon of resistance, pulled out of hiding places and tacked together from millions of metres of coloured cloth.

The stories of three desks frame my first visit to Libya. The first belongs to Michel Cousins, editor of the Libya Herald and was once Montgomery’s, the field-desk at which Monty worked in the back of his sweltering ten-ton mobile office. Saved from the vestry of the  Anglican church in Tripoli (where Michel had been a choirboy) when Gaddafi demolished it after the 1969 coup d’état, the small desk lived in his parents’ Tripoli flat until their final departure in 1982, and has since wandered through Scotland and France, perhaps to take up residence once again in the new Tripoli. History is migrating home.

As for the second desk, I can’t do better than quote my Libyan colleague and friend Salah Suhbi, who found it on a Tripoli street: “A few days after the liberation of Tripoli I saw a nineteenth-century desk, which turned out to be the Prime Minister’s during the King’s time, thrown onto the main street in front of the King’s palace – maybe someone wanted to steal it, or it was just thrown out in revenge. I have it safe in my house awaiting a restoration training programme this summer … Maybe the first democratically elected Prime Minister of Libya will use it one day soon …”

Another slipped stitch adroitly picked up. But Salah has done more than just collect discarded furniture and (with his permission) I want to dwell for a moment on his story, his revolution. Not just because it is a wonderful story of courage and heroism, a deadly serious Boy’s Own adventure; but because it is also an astonishing illustration of the power of culture, and cultural relations, in hard places and hard times. And on top of, beyond, both these, it is a story of sacrifice and loss, and of intensely felt moral responsibility to those tuwar, the revolutionary fighters, who died – a responsibility to build the better Libya for which they fought. I’m quoting liberally here from his article, called Breaking Our Invisible Chains, in Libyan Studies (no. 43, 2012), and in doing so pay tribute to a British Council colleague whose photograph, toting an AK47, provides a wonderful counterpoint to SS officer and playwright Hans Jöhst’s famous quip, “Every time I hear the word ‘culture,’ I slip the safety catch off my Browning.” (Salah is on the right; his cousin Abdulaziz Bahluli, a second year economics student, is on the left.) 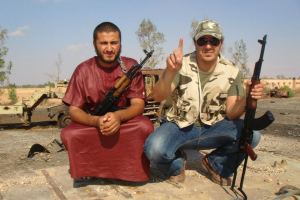 Salah describes the slow realization that Libya faced not a quick revolution like Tunisia and Egypt, but “a full-scale freedom war.” He took his family to his home town of Rujban, near Zintan in the mountains southwest of Tripoli.  He writes of the shelling and bombing as “we slowly gathered our strength, trained our people, protected our surroundings, professionalized the old civil councils and media centres, sleeping for hours only a day, but happier than ever.” He writes of the recapture by the tuwar of Rujban’s surrounding countryside, the advance out of the mountains to take the “el-Ga’a’, a huge military base in the Sahara,” where “the seventy storage buildings provided all the ammunition and equipment needed to move on the coast and free the cities west of Tripoli, our ultimate target.” He describes, almost in passing, the last push on Tripoli and the successful August 20th attack on the city. “After that night, Tripoli was ours and Libya was to be free.”

But the heart of Salah’s piece comes next. “As more of the country fell into Tuwar hands, we realized that society had to see change on the ground to trust the future being fought for.” And he writes of an amazing campaign of cultural relations, the building of a practical and ethical infrastructure for the new Libya. With another British Council colleague and his brother, he set up a newspaper called Uprising, of which “every issue explored concepts of governance, global values, citizenship and tolerance.” They broadcast English language courses, “so young rebels could listen to the programmes late at night around camp fires – cleaning their rifles while repeating and learning the words.” By July they had 800 or so children in face-to-face English classes too, downloading British Council teaching materials from the internet.

Oh – and he helped capture Tripoli between lessons.

This is an extraordinary and wonderful story of the power of cultural relations, of the work which the British Council has done around the world over the years. Salah writes that “the cultural links that organizations like the British Council fostered over the last decade have come full circle: everyone knew the UK was on the side of Libya’s people and had no doubt about the UK’s intentions towards Libya from the moment they led international efforts to support us.”

I have never had any doubts about the power of culture – and nor did Hans Jöhst – but to see it in action in this way is a rare privilege. I thought, as I read Salah’s article, of a comment by Freya Stark in a report on Iraq written in 1943: “The British Council, particularly, offending no nationalism, should take all the weight it can carry. When everything else withdraws there is every chance that these institutes will remain and flourish … the good it does is immense.”

After the war, the peace. Salah returned to a third desk, in the British Council’s office in Tripoli, where he continues to work at building a new Libya through international collaboration and Libyan effort in education, employment skills, arts and teacher-training. He has lectured in Britain, set up and funded a charitable English language centre based on internet self-access. He is writing a book about his war, which will (to judge from his article in Libyan Studies) place great emphasis – rightly – on the sacrifices made by Libyans to achieve their revolution; and the intense moral obligations that the people of today’s free Libya have to those who died achieving it.

Since I left at the end of last week, the Libyan government has written a magnificent letter of acknowledgement to the people of Rujban, recognizing their pivotal role in the strategy that brought down the Libyan government and the great sacrifices made by the town’s menfolk. As Salah says, of it, “I must say, never saw [it] coming and am so proud of their recognition and so pleased that Allah blessed me with the opportunity to be part of these days.”

My first visit to Libya was a strange experience – physically circumscribed, morally boundless, and richly educative. I was struck (and I wouldn’t want this to get lost in one man’s story, however splendid) by the commitment across the board to the work there by all our staff, and the sense, stronger than I have felt it anywhere else in the world I have travelled, that cultural relations have teeth. The Council in Libya is deeply committed to rebuilding the country, well trusted and well equipped. They have just, for example, won a 6.5 million euro EC contract to deliver Technical and Vocational Education. The whole office in Tripoli is doing an amazing job in hard but exhilarating times, has been evacuated in difficult and dangerous circumstances, has closed, faced violence and every day (as the picture below of Cherry Gough, its Director, testifies) faces unusual problems.

It has proved to me something that I have believed strongly since I ran a cultural relations think-tank called Counterpoint, a decade ago – that cultural relations are a real, tangible, potent force in the world. In Libya, they clearly are.

One thought on “A Tale of Three Desks”