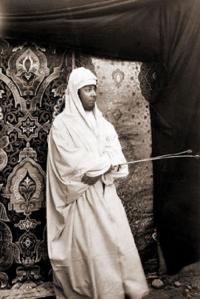 There’s a famous photograph of Moulay Abdel Aziz, reproduced in many Moroccan histories, and in editions of Walter Harris, who wrote amusingly, if sometimes disparagingly, about the Sultan. It was taken in 1901 at Marrakech by a French photographer called Gabriel Veyre, who worked for the Sultan between 1901 and 1905. Veyre’s life is interesting, with photography running through it as an important but intermittent thread; and a wonderful exhibition currently coming to an end at Bank al-Maghrib in Rabat, presents a broad selection of his still photography and ciné film. Veyre’s film archive was rediscovered by his great-grandson Philippe Jacquier, who assembled the exhibition and wrote much of the excellent accompanying book, republished under its new title for the occasion, both of which are called Dans l’Intimité du Maroc: Photographies de Gabriel Veyre 1901-1936. The photographs can be seen on a website devoted to Gabriel Veyre.

Veyre was a newly qualified pharmacist when in 1895 he was hired by the Lumière brothers to promote their moving picture technology around the world: he did so with gusto, in New York, Mexico, Cuba, Colombia, Martinique, Venezuela, Panama, Canada, Japan, China and Indochina. Along the way he took exuberant portraits of himself in whatever native clothing he could get his hands on. In 1901 he was hired by Moulay Abdel Aziz as the royal photography instructor. Once established in Marrakech, he found himself involved too with many of the Sultan’s other mechanical pleasures – expensive toys like motorboats and cars, musical instruments and even, if we can believe Harris, a stuffed bulldog with false teeth.

When his service to the Sultan ended in 1905, he settled in Casablanca where he spent the rest of his life in restless technological innovation, importing Morocco’s first motor car and establishing its first radio station, breeding ostriches and making ice, and farming asphodels to extract fuel from them.

He continued to be fascinated by photography. The first group of pictures in the exhibition is a mixture of silver gelatin prints and stereoscopic glass plates (which need to be viewed through red and green spectacles, like Avatar or Toy Story 3). Many of the black-and-white prints are taken not by Veyre but by his pupil, Moulay Abdel Aziz, and they are a credit to master and student. We see portraits (of the Sultan, Veyre, Minister of War El Menheby, soldiers, ladies of the harem); scenes of wild horse and gun play at the fantasia; street scenes in Marrakech; and the Sultan riding out beneath his parasol of state. Most wonderful of all, perhaps, is the Sultan in jellaba on a bicycle, leading a group of European and Moorish courtiers across a ramp built over half-buried boats in the Cour des Amusements of the palace. Alongside these stills are projected scraps of moving picture from the same date, a cavalcade emerging from a gateway, a fantasia – perhaps the same one – tiny fragments of street scenery.

All this gives a strange sense of intimacy (Veyre’s 1905 book, from which the exhibition picks up its title, is called Dans l’Intimité du Sultan). The prints are mostly clear and sharp, though one or two are tarted up with water colour. But the Sultan’s wives and concubines are a revelation. According to Veyre, sa grande joie fut de photographier, à d’innombrables exemplaires, ses épouses favorites. Il les faisait se revêtir de leurs plus beaux atours, brodés, multicolores; se charger de joyaux, de perles et d’aigrettes … and they are certainly spectacular. But the Sultan’s wives don’t smile at him, looking coolly and a little sadly at the camera from within ther finery, in contrast to Veyre’s subjects, women no doubt of lesser rank, who smile flirtatiously at the Frenchman behind the camera. His own self portrait in full beard and court robes suggests one reason why – a handsome face, and eyes that smile engagingly.

After 1901 (there is nothing in the exhibition to attest to his later years in Marrakech) there is a long photographic silence. The title of the exhibition, Photographies … 1901-36, is a little misleading, as 95% of the photographs were taken in either 1901 or 1935. Three decades after leaving Marrakech, in 1935, right at the end of his life, Veyre had an Indian summer of photography and ciné filming, in a long trip right across Morocco. Suddenly the sere tones of 1901 become colour, a little wan but lovely in their painterly restraint. He is using, for his stills, a technique called autochrome which employed stained potato-starch to filter light, and had been invented by his old employers the Lumière brothers in 1903. It was much favoured in the twenties and thirties by National Geographic.

The result is a palette of lovely, gentle, half-forgotten colours. Often you find yourself wondering for a moment whether the prints have been coloured in the studio (as I remember black-and-white portraits being coloured up in Cairo in the 1970s); but then a carpet, a parsley-bed or the shadow falling across a girl’s face reminds you that the colour is intrinsic. The landscapes are soft, and feel like compromises between Now and Then, a tentative, emergent spectrum that hints delicately and tactfully at its own reality, without asserting it in a flash of gorgeous, attention-grabbing pigment.

This is even clearer in the 1935 16mm film that played at the exhibition, the better part of an hour of slow, almost lackadaisical progress around Morocco where streets and lanes, brooks and bridges claim the same hesitant reality behind their inhabitants. These colours once had names, but are not colours of today – the sky is what our ancestors would have called watchet, a pale blue with a hint of green that we have forgotten how to isolate visually, and the whole palette has a feeling of claiming its period with firm but kindly precision. It brings to mind an avalanche of colours that once glowed on dresses, tunics and hose but have now faded into forgotten names – stammel and brasell, gingerline, plunket and flybert.

But then you look at the people, and the effect is electric: they are real people, not the wooden posers of the Marrakech photographs, but blithely moving individuals who are for the most part unaware of the camera. Two pretty little girls cross the 1935 suq: they are my mother’s age, and if they are still alive, they are in their mid-80s. A hunchbacked man in pin-striped suit and boater whom we see only from behind, his distinctive walk proclaiming him someone well-known to those around him, but vanishing obliquely into the watchet sky. A man in his fez – faded stammel perhaps – guarding sheep. Boys diving into a pool. A monkey riding a dog outside the Bab el Mansour at Meknes. Officers in képis strutting with riding-crops under their arms. A Frenchwoman riding side-saddle with a look on her face that suggests she doesn’t like the smell of someone. Veyre himself handing out money to bystanders with avuncular grin. A scholarly looking fellow on a bicycle, his crumpled – flybert – linen jacket speaking of carelessness, or perhaps humility, or possibly arrogance. As Veyre films by a road in the Atlas, two people walk past: we see only their shadows, and to the film-maker they were perhaps a small irritation, spoiling the clarity of his shot, but to us they are a token of reality, visitors direct from 1935, real, unselfconscious and liminal.

Veyre’s film is gloriously artless, apparently accidental, even bitty. Scenes are separated by handwritten cards, the celluloid is heat-bubbled in places, many scenes too short, others too long. But it speaks magically of a time and a place that are still no further away than the span of a long life, intimately connected to today, but located in another dimension. I watched entranced, feeling for gaps in the membrane that separates Then from Now, and coming close, but not quite finding them.

It put me in mind of a Moroccan friend, a man in middle age and of considerable rank, with whom a year or so ago I visited an exhibition at the Jewish Museum in Camden Town, of photographs of Moroccan Jews in the High Atlas in the 1950s. We walked separately through the haunting prints and film loops of rural Jewish life and the final departure of the whole population from one mountain village. I looked across the room and saw my friend weeping silently. “Are you all right?” I asked. “Yes,” he said, “but I am looking at the Morocco of my childhood, and it is quite gone.”