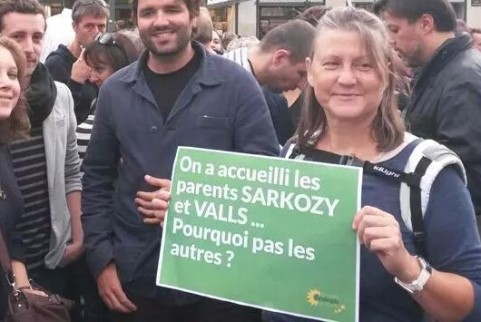 We are told with po-faced solemnity that there is a real danger of the Daech’s smuggling Islamic State terrorists into Europe in the vast column of refugees that is now knocking at our gates. I daresay this is true – it seems likely that amongst the million or so refugees entering Germany alone this year will be a few bad guys, as well as a lot of dentists, cameramen, street-sweepers, research chemists, hockey-players, games-programmers, pickpockets, graffiti artists and ney-players. So what? This is true of any mass movement of people, and it is plainly silly to think it possible to scrub a refugee population clean of all its murkier elements. But I rather doubt that there is a bearded mastermind in Raqqah co-ordinating the disguise and cover-story of suicide-bombers and arranging for them be pushed surreptitiously to Germany in wheelchairs. Why on earth would they bother?

Pause a moment to compare this curious (and frankly inflammatory) assertion with reports from Bangladesh last week that Britain is the source of much of that country’s daechi recruitment: “We have growing numbers of Bangladeshi diaspora guys coming here from Britain to recruit,” as a Bangladesh Intelligence source told the Guardian. “There are very large numbers of young men [in Bangladesh] who don’t have a job or any prospects. Their only experience is the madrasa and the mosque … when Bengalis from the UK come in, they are very easy to lead. The jihadi recruiters are coming from London, from Germany, from the US.” No need for cunning disguise here – you just buy an air ticket. Because the bad guys (as governments, in different contexts, are continually warning us) are already in Europe.

The refugee crisis, unfolding each day in new and often ghastly permutations, is morally as well as practically challenging: it is not easy, and perhaps not possible, to reach a fully-rounded reaction to it yet. Any well-functioning human being wants to help and welcome the river of humanity that stretches from Syria into central Europe, of people rescued from the immolation of Syria where so many of them began their awful journey. Equally, there is fear mixed with that generosity. One after another, transit-countries have thrown up their hands helplessly, unable to deal with the vast moving column of refugees marching north and west. The Macedonian-Greek border, the Serbian-Hungarian border, the Serbian-Croatian border, the Austrian and German borders have been closed, not necessarily out of malice, as often just overwhelmed by the demands on small countries and small border villages. This is perfectly understandable. But there are many commentators and political actors who by their choice of vocabulary and imagery (not to mention the solutions that they propose) clearly intend to push the popular view not to careful reflection, but to xenophobic rejection.

This growing xenophobia, sometimes legitimised by governments, everywhere in the background, is most visible at the moment in eastern Europe, though not absent from the west. The Czech Republic has become almost hilariously paranoid, with chimney-sweeps and foreign footballers mistaken for terrorists. Even in Germany it seems that the bulk of anti-refugee attacks take place in the old DDR rather than the BRD. At Roszke on the Hungarian-Serbian border masked Hungarian border guards fire tear-gas and water-cannon through the fences, shouting at the thousands of refugees – it would in other circumstances be almost funny –  “Go away.” As George Szirtes points out, this is aimed at domestic audiences: the Hungarian government has put up hundreds of billboards telling the refugees that they will not be allowed to take Hungarian jobs. These billboards are, naturally, in Hungarian, a language which not one in ten thousand Syrian refugees speaks. And yet it is essential that we not forget the Hungarians, Romanians, Slovaks who swim bravely against this tide and question the callously nationalist sludge running down Europe’s gutters.

What is particularly disturbing is to watch governments across Europe treating the refugee crisis as a domestic political problem. Reactions are trimmed to the electoral winds in each country, rather than to the gale of humanity blowing out of the Levant. Fearful of the growing chauvinism of the right, whether from Jobbik or Pegida, UKIP or the FN, Europe’s governments are rowing back. Germany and Sweden have been honourable exceptions (Mrs Merkel was keen to show “Germany’s friendly, beautiful face”: but Germany has now closed its borders, and the river of humanity has frozen almost solid. By offering asylum to all Syrians and then shutting the door again, Germany seems actually to have significantly contributed to the awful knockback of human tragedy along the Balkan corridor).

The rhetoric is often small-minded, and deals with what we can allegedly afford, with the ‘austerity’ under which we live, the sheer numbers of refugees that would overwhelm us, the cultural threat to Christian Europe and – as I noted above – the risk of importing terrorists. By way of antidote to that I shall quote (at length because it is so very clear and good an expression of another, and better, way of looking at this whole problem) a letter from a newspaper last week, written by Paul Anderton of Newcastle-under-Lyme, about the welcome that Britain offered to Belgians in the autumn of 1914:

Estimates of 100,000 Belgians, mostly in family groups, and overwhelmingly coming in the three months of September to November 1914 were welcomed throughout Britain as victims of a war their government did not seek, and ours did little to avoid. They crossed the Channel by ferry and fishing boat, crowded into Folkestone, and were distributed out of holding camps in London by a volunteer War Refugees Committee headed initially by Lady Lugard and Viscount Gladstone.

These families were welcomed in towns and villages by a spontaneously formed scattering of committees which raised cash, found empty houses, organised brass bands to greet them at railway stations.

Newcastle-under-Lyme, prompted by the mayor, entertained more than 100 Belgians and raised over £2,000 before November 1915 to support them in groups managed by various church congregations.

Leek housed more than 50 refugees in three different properties by Christmas 1914 and silk-mill workers led a fund-raising scheme which made over £2,500 by May 1916.

Congleton was the first place in Cheshire to receive Belgian families, on Tuesday 8 September. Their reception was an occasion of great excitement, with two brass bands to conduct them from the railway station to their accommodation, with large crowds applauding in the streets. There is much to learn about handling a refugee crisis from a contrast between three places.

One very obvious observation is that in 1914 the government was slow and clumsy in its response to the flood of humanity. Churchill flatly rejected any idea of receiving them, and the Local Government Board had no part in distributing the families. This was done by volunteers. In fact, it was the charitable and humanitarian instincts of all sections of society that ensured that scores of thousands of families fleeing from a war zone were found shelter, food and clothing when most arrived with nothing. This episode is not quite forgotten as an aspect of the first world war, but too few lessons have been learned from it because it has never been given the attention it deserves.

The population of England and Wales in 1911 was about 36 million; of Scotland another 4.7 million. So 100,000 Belgian refugees represented some 0.24% of the UK’s population. The same proportion of today’s population, 63.4 million, would be 152,000. This is a trifle larger than the 20,000 – 0.03% of the population – that the British government currently proposes to receive; but much smaller than Mrs Merkel’s 800,000 who would constitute 0.1% of Germany’s people. (Last week’s EU quotas, small as they were, are in the range of 0.01% to 0.04%.) Then, as now, it was left to citizens rather than government to lead the effort and make the moral weather: “Churchill flatly rejected any idea of receiving them,” but Britain got on with it.

The local newspaper in our corner of north-west Essex reports that our Conservative-controlled District Council has debated the reception of migrants, and voted unanimously in favour “of playing a  full part in the housing and support of refugees seeking asylum in the UK.” As one councillor put it, “On the whole, Uttlesford is a very rich area and I would ask the working group to think about the resources available and the willingness of the people of Uttlesford to help and contribute, and I would like to see us go above and beyond what is simply our duty.” I am proud of them. No mention of who – of religion, gender, age – just unconditional openness, as “a compassionate community, to welcome desperate people and to give them sanctuary.”

That openness is vital. Most pictures of refugees are of children, families, the elderly and handicapped. The images that have particularly stirred Europe’s conscience have been of a dead child on a Turkish beach, or a Hungarian journalist tripping up an old man carrying a child, for camera. But in reality most refugees reaching the EU, and about 80% of those reaching Germany, are young men, aged 16-20, less picturesque and in some eyes more threatening. How we welcome them – the (as yet untested) Uttlesford way or the (all-too tested) Roszke way – will define the outcomes. They have very significant contributions to make to our European societies if we welcome them, give them the opportunity to work, study and remain. But if we don’t – if we make them feel excluded, despised, shut out from work, study and friendship – there will be bitterness. Irina Molodikova, an analyst from the CEU in Budapest, wrote recently that “Refugees are with us, and around us in the neighbouring countries. If we do not help them, we will marginalise them. And then – further down the line – they will follow those who promise them a better life and they will believe in it.”

Which, come to think of it, is what is happening to those young Bangladeshis “who don’t have a job or any prospects,” and are susceptible to the Pied Pipers of Bethnal Green, Cardiff and Luton. Europe must be very thoughtful, and judiciously (but generously) open-armed: there isn’t a practically, or morally, viable ‘No’ option.