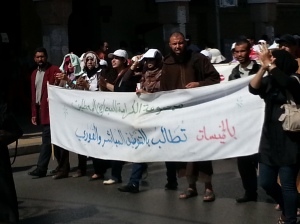 Last weekend 500 demonstrators fought it out with police at Bab el-Rouah, outside the Ministry of Education. That matters got violent is a measure of the desperation of the chomeurs diplomés who find themselves part of Morocco’s structural unemployment problem. Today, October 6th, there was another, slightly larger, demo in the centre of Rabat, also about unemployment. Many of the participants were simply demanding jobs, like hunger marchers demanding food (though the graduates were out-shouted by more political demonstrators protesting about the government, corruption and prices).

But there’s an odd twist to this demand. These young people see jobs being advertised in the public administration, but they don’t – on the whole – want to apply for them, because they insist on ‘100% integration of unemployed graduates into the public administration – without further qualification or competition,’  and they don’t like the implication that they have to prove anything more than their degree already proves. Whether there is a function for them to fulfill, or whether indeed they are qualified to fill any function. And asking them to compete with each other is an impertinence: they should, they feel, ALL have government jobs.

This is a tragic dialogue of the deaf. Too many young Moroccans believe that there is an implicit guarantee of employment in the public sector for all of them once they step out of their ballooning universities (which may have been possible in 1956 when there were about 3,000 Moroccan graduates, of all ages, in the market: but isn’t even imaginable today, with 600,000-plus students in the HE system). The public sector, bloated and overstaffed with notionally qualified but frequently less than competent staff, can’t absorb more of them, and knows it. The Head of Government himself last year made clear that this kind of blind hoovering-up of the ‘educated’ unemployed is a thing of the past. But too many students see Higher Education simply as a route into the civil service. Five years ago, when the civil service grades at which MA and PhD students can enter, by right, were merged (at the lower level hitherto open to MAs) large numbers of PhD students simply gave up their studies and entered the service. Even doctoral studies were often apparently no more than a ladder on the Snakes-and-Ladders board of public sector employment.

There are two very different understandings of the concept of a ‘job’ in play here. For many young Moroccans, jobs grow on trees. They are things, objects of desire, which can be created ex nihilo and distributed at will, with no necessary relationship to function or requirement on the one hand, nor ability or willingness to work on the other. After the last bulk distribution of politically dictated jobs a couple of years ago, I remember talking to an official who told me that his ministry had been allocated 150 or so of these young job-seekers, his department seven – and that of those seven only one was even marginally useful in any way whatsoever. It is a bizarre triumph of supply (of graduates) over demand (for them). Economists, employers and ministers see jobs differently – no less important, but a product of economic growth which must in turn feed further growth and development.

Morocco certainly has a problem: graduate unemployment is too high in itself at 18%, and it is also much too high in relation to general unemployment (9%, officially). This disparity suggests that (whatever desires may be in play) an ordinary degree isn’t actually very useful in getting a job. Possibly the opposite. The government is very busy with ambitious plans in every sector, designed to boost productivity and job-creation, but it hasn’t made much of a dent in the employment crisis for graduates.

But what about the private sector? That’s surely where the dynamism is, the wealth-creation and the job-creation – that’s where ambitious young Moroccans should be looking, isn’t it? And the problem, obviously, is how to re-design Moroccan university syllabuses and degree courses so that they equip graduates for the labour market. How to ratchet up their language skills and their soft skills so that private sector employers will want to hire these graduates, and so that ambitious young Moroccans can build successful careers and contribute to Morocco’s economic growth. Obviously.

Well, no. Not obviously at all. Most university graduates don’t seem to be ambitious young Moroccans. I’ve seen figures of 70% for the proportion of students who, when polled, say they would prefer to work in the public sector rather than the private. One demonstrator quoted today, Youssef B, ‘who holds a Master’s degree in French literature and has been unemployed since his graduation two years ago’ says: “The private sector is not well organized and there are no guarantees for wages or good benefits – the public sector guarantees dignity”’ (Morocco World News). You might think that any job, in the private sector or anywhere else, is better than no job, but apparently this isn’t the case for Youssef who, if we can believe what he says, would rather be unemployed than work in the private sector.

However greatly we may sympathize with young people out of work, there is an astounding lack of realism in this attitude. When European and American students are unemployed they take low-paid jobs, flipping burgers or stacking shelves – and even these jobs are harder and harder to come by.  Much government energy in the UK is going into making not working unattractive, in order to get young people into jobs. No one in Europe sees the public sector as a cushy number any more (if they ever did).

Here’s another of today’s demonstrators: ‘“The solution for unemployment is to create government jobs, especially for those with university degrees,” said Jawad K, who graduated with a degree in nuclear physics in 2012.’ Well, sure as eggs is eggs, they ain’t going to be creating lots and lots of jobs in nuclear physics, so what Jawad means is that he wants a cosy little number as a muwazzif in the Ministry of Inkwells, pushing paper about a bit; or as a teacher, pushing chalk.

This seems to me to be one of Morocco’s core problems today – a pathological risk-aversion. A low-paid job of any sort in the public administration is the goal (it doesn’t matter what job – I have never seen a single demand that specifies the type of job, just ‘a job’). It is hard to see how the Moroccan economy is ever going to go up the gears it needs to go up if all its graduates continue to seek safe, small security rather than risky but larger reward.

In Britain the present crisis has seen brutal rebalancing of the public and private sectors. By the next election the government will have eliminated between 400,000 and 600,000 public sector jobs on top of those already gone since 2010. The Chancellor recently said that 1,000,000 private sector jobs have been created during the same period. Now that’s a very radical rebalancing in favour of the productive economy, and many, not just those who have lost their jobs are fiercely opposed to it. But no one in Britain would argue, unless they wanted to be laughed out of the room, that “the solution for unemployment is to create government jobs, especially for those with university degrees.”

It all comes down, like so much in Morocco, to education reform. Until university courses are focused on the employment prospects of their graduates in a competitive market, they’ll just go on turning out graduates in French literature and nuclear physics who want ‘a job.’ Moroccan universities are addressing this problem as best they can, some with real distinction and success. A visiting British expert recently told me that in his view Moroccan universities were more advanced than any others in the MENA region when it comes to employability training. There must be more: more hard skills training, more English language, more soft skills, much more employer engagement and consultation over what is taught.

But above all, this awful risk-aversion has to be addressed, which is easier said than done. It means demonstrating that the chances of success are real, that aspiration is worthwhile. That corruption, hogra and the fear of others’ success won’t squash ambition. And this isn’t just about education – it’s about politics.

And I really do hope that Youssef and Jawad find not jobs but productive, satisfying and fruitful careers. Morocco needs them.

One thought on “Risk-adjustment and jobbery”